Doors open when prospective clients hear that Mo Hamdouna’s creative agency is based in Melbourne.

‘When we say we’re from Melbourne it provides confidence. The name of Melbourne and the city itself is helping us when we work with international businesses in particular,’ Mo said.

He knew he needed to find a locale with flair for his creative agency, Mo Works, when he took the leap from freelancing to launching a business in 2014.

Docklands was calling. It was the first place he called home after moving down from the Sunshine Coast two years earlier. It endures as one of his favourite places.

‘Docklands is the best of both worlds. It’s central, near the CBD, which is creative, and there’s no shortage of talent. So we stay competitive,’ Mo said.

‘But it still has this suburban feeling and community support that allows us to build a strong network around us. And it’s got the waterfront.’

Mo Works is now a well-established, full-stack digital creative agency with an in-house team of designers, developers and marketing gurus who pride themselves on bringing to life the visions of Melbourne businesses. 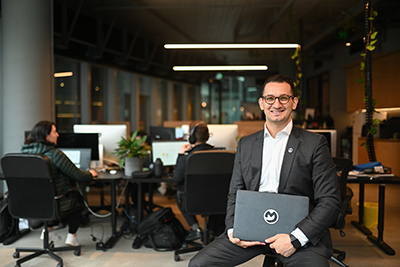 It’s a multicultural team that collectively speaks more than 12 languages, and Mo hopes to expand his staff from 20 to 40 over the next year or two.

As the secretary of the Docklands Chamber of Commerce, Mo is keen in turn to ‘put Melbourne and Docklands on the map internationally to strengthen its position as a creative city’.

‘The city is full of diverse opportunities and businesses. Keep an eye on what the city has on offer because there’s always things there, from grants and programming to networking events and awards.’

Those connections helped his agency ride out the storm when COVID-19 hit.

‘We didn’t feel left alone. We had great support from the city and the community. Everyone tried to support as much as they can,’ Mo said.

The agency quickly devised a series of workshops that helped more than 75 businesses recalibrate, transform their brand, go digital and more. City of Melbourne helped make those workshops happen though the business support program.

There are nine local business precinct associations in the City of Melbourne, teaming up to find new ways to promote their busy retail areas and attract more visitors.