You’re among friends when you run a small business in the City of Melbourne. It’s just that your friends are super high achievers, according to King and Godfree director Luca Sbardella.

‘The best thing about running a business in the City of Melbourne is the company we keep. It’s like being in the premier league of hospitality. That keeps us striving to provide our customers with more unique experiences,’ Luca said.

His grandfather took over a corner store on Lygon Street in Carlton in the 1950s and set about introducing curious Melburnians to the best in Italian groceries. Since then, King and Godfree has expanded into a whole precinct.

‘We really wanted to expand King and Godfree to include the things that we thought were missing, like the gelateria, the vinoteca and the rooftop bar,’ Luca said. 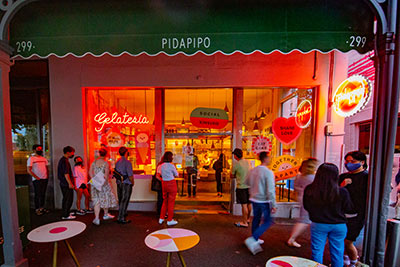 Pidapipo is a newish member of the King and Godfree family

Expanding a business in the wake of a pandemic takes a certain blend of bravery and foresight. The payoff is worth it.

‘Anyone who’s involved in the hospitality industry can tell you that it’s not an easy task, especially over the past two years. Melbourne has such a high number of world-class hospitality,’ Luca said.

As president of local business association Carlton Inc, Luca encourages his peers to ride the ‘ups and downs’ of life in hospitality and retail, and tap into City of Melbourne initiatives such as Melbourne Money and business grants when they arise.

‘There will always be emerging hip spots to open a business. But if you’re planning on being in it for the long haul, there’s probably no better place to be situated than within the City of Melbourne. 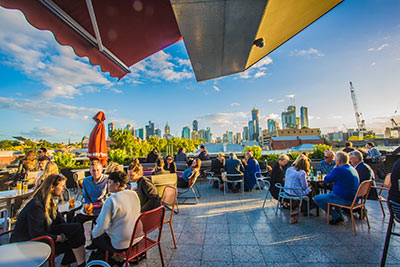 ‘Once we see more international travel and events start to come back, I think people will be kicking themselves for not signing cheaper leases when they could have.’

King and Godfree received a Lord Mayor’s Commendation in 2006 to acknowledge its 50+ years in the city. We’ve refreshed the program this year, and it’s now known as the Lord Mayor’s Small Business Awards.

We’re here to support businesses no matter where you are in their adventure, from the friendly Business Concierge Service right through to strategic thinking in the engine room of Invest Melbourne. Find out more.