Meet some of the Melburnians who have lifted other women, and created a path for those who are yet to come.

The fearless journalist who brought ‘Breakfast’ to Melbourne has a few things to say to the women around her on International Women’s Day.

‘My message is to take up space,’ Patricia Karvelas said. She recently stepped into the shoes of broadcasting legend Fran Kelly as the host of RN Breakfast on ABC Radio. The program now airs from Southbank each weekday morning.

‘Keep showing up. Refuse to sign up to gendered social expectations that limit your potential,’ Patricia said.

A joyous member the LGBTIQ+ community, and proud of her Greek heritage, Patricia draws feminist inspiration and strength from her sisters Sue and Voula.

She hopes that more diverse women ‘take their own place in the public sphere’ and make their workplaces richer by bringing their own perspectives into their professional lives.

‘I bring my full self to work,’ said Patricia, who can switch effortlessly between holding powerful people to account, and full-body dancing in the studio to Mariah Carey’s festive classic.

She’s a Melbourne woman through-and-through, having studied at both University High and RMIT. 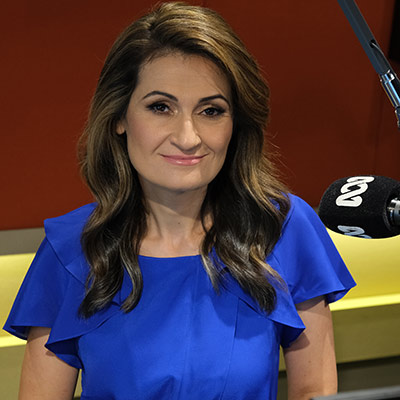 ‘Only when women can bring their full selves to work – without the shackles of gendered expectations – will we truly thrive,’ Patricia said.

Already a powerhouse, Patricia Karvelas stands on the shoulders of giants. Women who have made space for themselves in our culture where the path was not clear.

Through their determination, Melbourne has become a better place. A great place for women.

Walk with us to meet just a few other notable Melburnian women who reflect the values of International Women’s Day 2022: Gender equality today for a sustainable tomorrow.

A hospital for women, by women

The local medical fraternity was aghast when in 1887 Lilian Alexander and Helen Sexton wrote a letter to The Age to find out if any other women wished to study medicine at University of Melbourne. Five replied.

After much public hand-wringing at this audacious ‘assault’ on a traditionally male domain, the university admitted them.

The women graduated and formed a formidable group of 11 doctors.

Together, they resolved to put the health of women first, especially those who were poor and uncomfortable with male doctors. 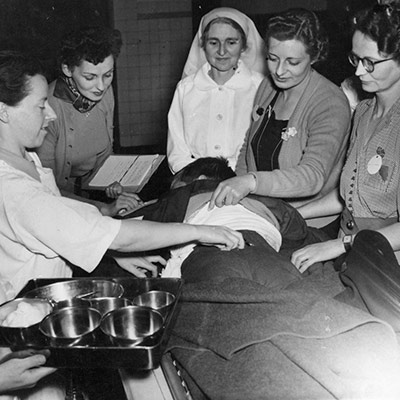 Led by Dr Constance Stone, they hatched a plan to create a hospital staffed by women, for women. After a fundraising campaign, the Queen Victorian Hospital opened in 1896.

It was one of only three hospitals in the world to be founded, managed and staffed by women. Royal Women’s Hospital in Parkville has since taken carriage of women’s health.

A room of one’s own

Within the grand structures of the Freemasons and Mercy hospitals in East Melbourne, we find the determination of architect Edythe Ellison Harvie.

Described in 1936 as ‘an architect of brilliant achievement and great promise’, her skills in hospital architecture helped her firm to gain an international reputation in the field.

And yet Ellison – as she was known – insisted that hers was ‘a cooperative profession’.

Many of Ellison’s buildings are still standing today, in Melbourne and further afield. 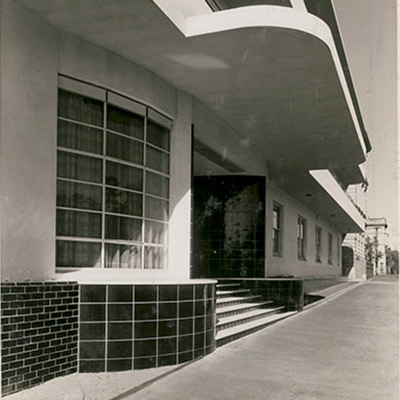 A committed modernist, Ellison also became an advocate for the professional development of women, calling for an end to workplace discrimination.

Two of her buildings were designed specifically for women, including the Lyceum Club – a haven for professional women, where she was president from 1963–65.

We can’t talk about women in architecture without beholding the crystalline roof and extravagant surrounds of the Capitol Theatre.

Here, the skill and vision of American architect Marion Mahony Griffin is clearly at work. 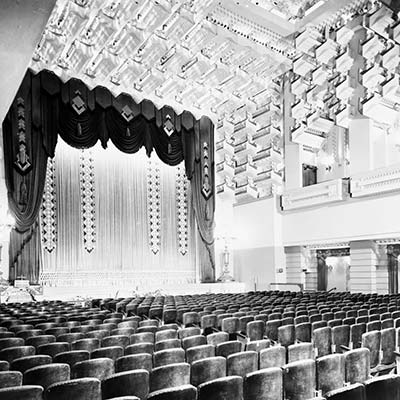 Marion was often overshadowed by her better-known husband and professional partner Walter Burley Griffin, even though she was the more senior architect, and one of the first licenced female architects.

The Capitol Theatre was a gift to Melbourne that boosted post-war spirits and keeps on giving today. It’s also a reminder of a trailblazer for women in architecture.

Have you ever sought skincare advice from a person in a lab coat on the shiny ground floor of a department store?

This classic sales technique was honed in Melbourne by Polish immigrant and entrepreneur-in-the-making, Helena Rubinstein.

When Helena migrated to Australia in the late 1800s – reportedly with jars of cold cream in her coat pockets, she was penniless and spoke little English. But that didn’t stop her from building a cosmetics empire ‘based on cold creams and dreams’.

Soon she had earned the admiration of Melbourne society, and opened several glamorous salons on Collins and Elizabeth streets. Dame Nellie Melba reportedly sang Aida in one such salon while the tiny Helena stood on a chair to examine her skin.

Helena’s approach to beauty care revolved around consultation, prescription and treatment, creating the foundations for a beauty industry that is still recognisable today.

By 1908, she had outgrown Australia and took her growing empire to London, then Paris, New York and beyond. A keen eye for business made Helena one of the richest women in the world, and a generous philanthropist.

Over 60 years, the Helena Rubinstein Foundation distributed nearly $130 million, mostly to support women and their children. She was convinced that education was a clear path out of poverty and encouraged women to pursue non-traditional careers.

The struggles for racial and gender equality are intertwined, according to writer and former lawyer Nyadol Nyuon.

Born in a refugee camp in Ethiopia and raised in Kenya, Nyadol arrived in Melbourne in 2005 and studied hard.

Now she is the Executive Director of Sir Zelman Cowen Centre at Victoria University, and chair of the Harmony Alliance, a national coalition of migrant and refugee women for change.

She is also a regular media commentator on human rights issues.

As a young Sudanese woman, she was seen as radical.

‘I remember being told once that I was too ambitious for a woman,’ Nyadol said. ‘Sometimes you feel like you should have whatever dreams other people have for you, especially as a young person.

‘I have taught myself that my own dreams are valid and worth chasing.’

When mathematician Alison Harcourt began her degree at the University of Melbourne in 1947 she was one of only two women studying maths.

She went on to develop a mathematical concept called ‘Branch and Bound’ with a female colleague. The theory still forms the basis of efficient computer programming today, and is even used in cancer therapy.

On receiving her award as Victorian Senior Australian of the Year in 2019, she also urged women to pursue their passions in maths and science, drawing on the work of women who have come before them.

Look closely and you’ll find reminders across the city of the visionary work of former Lord Mayors Lecki Ord and Winsome McCaughey. 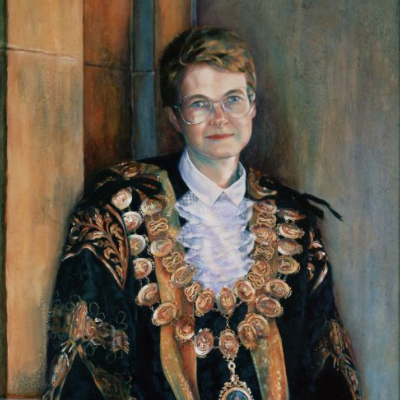 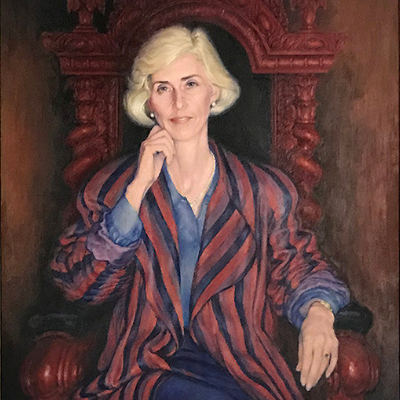 These visionary leaders helped to convert Melbourne into a vibrant, industrious and liveable city through programs such as Postcode 3000.

Study is a powerful pathway that can help us understand where we have come from and where we are going as a society.

Proud Boon Wurrung elder N’Arweet Carolyn Briggs AM established the Boon Wurrung Foundation in 2006, and is a strong advocate for the restoration of Boon Wurrung language.

She recently graduated from RMIT alongside her daughter and granddaughter.

‘It gave me courage to see these young ones take their path and go through university,’ Carolyn told RMIT in 2020. She now holds a PhD that explores elder identity and knowledge.

‘Education is a tool that opens up a bigger world. Now I can go global.’

Women at work across the city

And hundreds of women-run small businesses have both persevered and flourished within the municipality, receiving Lord Mayor’s Commendations for their efforts.

Each year we bestow the city’s highest accolade, the Melbourne Awards, on the Melburnians who dedicate their energy to making Melbourne a better place.

Do you know a woman who deserves to be acknowledged for her contribution to the city? Melbourne Awards applications open in May.

Read about other notable Melbourne women who have shaped the city we live and work in. And hear why Lord Mayor Sally Capp says Melbourne is a good city for women.