A 118-year-old tall ship is one step closer to resuming its role as a training vessel for at-risk youth with its relaunch into Melbourne waters this weekend.

After eight years of restoration and more than 80,000 volunteer hours, the Alma Doepel will finally be moved from its custom-built barge, along the Birrarung, under the Bolte Bridge and into Victoria Harbour on Saturday.

The restoration of the majestic schooner is an ongoing labour of love for a dedicated team, including former youth voyager and project board member Matt McDonald.

‘The Alma Doepel was made by early settlers who went into the bush and built a ship out of trees, which they launched in 1903. From an Australian maritime perspective, she is very unique,’ Matt said.

‘Since then, the ship has had an amazing history, trading up and down the east coast, going to New Zealand and ending up on the run between Hobart and Melbourne as part of the IXL jam fleet, bringing fruit to supply the jam factory in South Yarra.’

Decades later, the Alma Doepel was used for youth sailing expeditions in the 1980s and 1990s. This will be the ship’s purpose once more when she is fully restored, under the ownership of Sail Adventure Australia.

‘When I was 14, I went on the Alma Doepel, and I’m now a ship’s captain. I wouldn’t do what I do if I didn’t go to sea as a teenager,’ said Matt, who also met his future wife on that fateful voyage.

‘The Alma Doepel has changed lots of lives during her maritime career, including supporting disadvantaged young people who’ve come on board to learn about leadership, resilience, teamwork, and themselves.

‘Having the opportunity to go away for nine days with no digital screens is really special. We think these programs are needed now more than ever, particularly when you look at the incidence of youth mental health, suicide and substance abuse.

‘Not only is the Alma Doepel important because of its place in Australian history, but also because of what the ship will do for young people once in service. She has so much to offer. That’s what motivates us.’

Local people have thrown huge support behind the Alma Doepel restoration, which has been made possible by extensive fundraising. The City of Melbourne has also provided $300,000 towards the works and waived berthing fees for 12 years.

The project team has faced complex challenges during its journey, including moving the ship between land and water, securing a spot for it to be restored, and sourcing timber of the right quality and size. 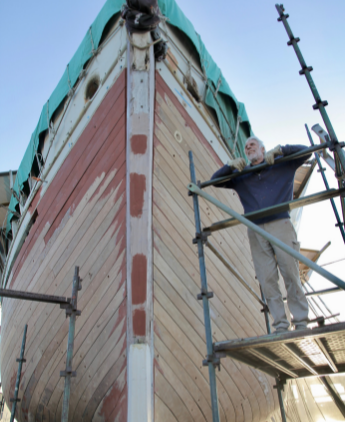 Thanks to support from Development Victoria, they have even used 100-year-old timber from under North Wharf, recurving and laminating it into structural parts of the ship.

COVID-19 presented further challenges, restricting the amount of people who could work on the hull, and making fundraising events impossible. Yet still the team has forged on.

‘The ship is now in a more structurally sound position that in was in 1903. She has another 120 years ahead of her,’ Matt said.

After safely returning the Alma Doepel to the water, the team is now focused on securing funds to complete the restoration, including finishing the deck, rigging, interior fit-out and engineering.

They hope that the ship will be operational and hosting youth sailing programs in one to two years.

To find out more and lend your support, visit Alma Doepel.

Did you know
Melbourne has a rich maritime history and Victoria Harbour was once the biggest man-made harbour in the world, built with steam shovels.

To find out more, and what we’re doing to ensure these stories are honoured and respected into the future, visit Exploring Melbourne’s maritime history.

For more information about commercial and recreational boating in Melbourne, including how to book a berth, visit Boating and waterways or Melbourne City Marina.

To find out what we are doing to support people and businesses as the city emerges from lockdown, visit Reignite Melbourne.