A 100 year-old copper weathervane in the form of a galleon-style sailing ship has been restored and returned to its rightful place atop the historic Mission to Seafarers building in Northbank.

Local master craftsman Henry Alfred Saw crafted the weathervane in 1917, when copper was expensive due to World War I. After a century on the rooftop in high winds, the weathervane was in need of repair.

Enter expert conservator Evan Tindal from the University of Melbourne, whose career has spanned archaeology, art conservation and preserving objects from shipwrecks. Evan particularly enjoys exploring how things are made.

‘For a utilitarian object, the weathervane is unusually intricate, and represents the high levels of both craftmanship and artistry of its makers,’ Evan said.

‘The way the sheet metal of the sails is beaten to curve as though billowing in the wind, the bulging hull of the ship, and the delicate rigging details make it quite a special and evocative object for something that is also structurally robust, and was intended to serve use as a meteorological instrument.’

The weathervane’s delicate design, and its exposed rooftop position, presented some challenges to its conservation. Evan and his team aimed to retain the seamless appearance of its construction, with the additional strength of some more contemporary and robust joining methods.

The colouration on the weathervane’s surface, or ‘patina’, was also a subject of interest. The team’s approach was to strike a balance between protecting the metal from further degradation and preserving the natural patina that speaks to the object’s history and contributes to its beauty.

‘The ship has such a wonderful, overall bright green patina, the result of the copper content converting to an oxidised state, which we wanted to largely preserve,’ Evan said.

‘The mottled pattern on the letters, however, required attention as there was a risk to the metal. For these, I worked to reduce the corrosive elements, and re-patinated the metal to a more uniform colour, which would be about consistent with the appearance when the ship was first fabricated.’

The historic weathervane is included as part of the Mission to Seafarers building’s heritage significance on the Victorian Heritage Register, along with its chapel and archives, which are regularly on public display.

‘Despite being inanimate, cultural heritage material is highly potent. It can reinforce a sense of belonging and community for different groups, or simply serve as a source of inspiration and wonder,’ Evan said.

‘It’s a bit of a holistic process – we preserve so that people can continue to value cultural heritage, and things are preserved because people do value them.

‘I’d like to reiterate the importance of small organisations like the Mission to Seafarers, without which this project wouldn’t have happened, and which are so vital to the preservation of the state’s maritime record.’

The restoration of the weathervane was funded by a grant from the City of Melbourne’s fund within the Victorian Heritage Restoration Fund as well as private and public contributions.

For more information about heritage, conservation and planning in the City of Melbourne, visit Heritage. To apply for funding, visit Heritage grants. 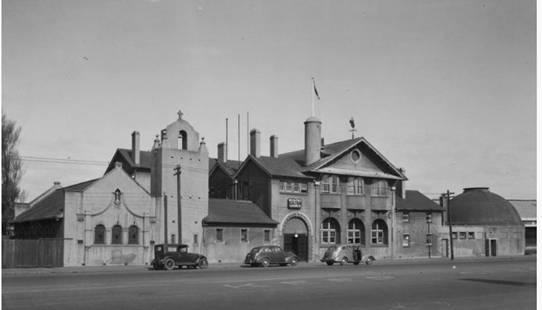 A historic photo of the Mission to Seafarers building, with its weathervane in place

The Mission to Seafarers is generally open to the public every day from 10am to 10pm, but check online for confirmation during COVID-19 restrictions. The historic place is located at 717 Flinders Street, Docklands. This is close to tram stop D5 on the city circle line.

Look out for specially designed biofiltration systems, or raingardens, on city footpaths. These unassuming garden beds use plants and soil to capture, filter and clean stormwater.
Find out more

Keep up with what's happening in the City of Melbourne by subscribing to the Melbourne newsletter.

Find out what's on in Melbourne with all the latest events, shops, restaurants and things to do.
What's On