As baristas and enthusiasts gather for Melbourne Coffee Week, we explore our deep love of jitter juice – from the opulent coffee palaces of the 1800s to today’s hole-in-the-wall cafes.

When old coffee beans were unearthed at an archaeological dig at a Melbourne Metro site in the CBD recently, it confirmed something we already knew about ourselves.

Liquid lightning has long powered the good people of Melbourne.

More than 500 coffee beans were perfectly preserved when a grocery store burnt down in 1855, along with other supply-kit essentials bound for the goldfields.

Excavation director Megan Goulding said she was surprised to find out that even in the gold rush, Melburnians were importing, grinding and roasting beans. And most likely taking coffee with them to the goldfields.

‘These beans are symbolic of the fact that during the gold rush, Melbourne had access to all sorts of exotic foods,’ Megan said.

‘The influx of hundreds of thousands of people from all over the globe bought exotic goods and tastes. The revenue from the gold also meant that a wide variety of foods could be imported to satisfy these tastes.’

The goldfields would shape Melbourne into a glamorous, world-class city. And as the city transformed, coffee kept fuelling the city’s growth.

Coffee stalls stood on colonial street corners in the Hoddle Grid with huge vats of coffee, and sandwiches and cakes.

Until the 1870s, city coffee stalls were open all hours, bringing the city alive at night ‘like a fairy scene at a pantomime’, according to State Library Victoria. 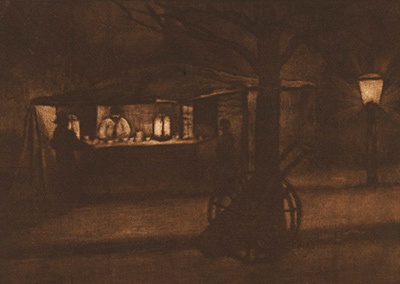 ‘Coffee has been a vehicle for social change at different points in Victoria’s history,’ Linda said.

As the temperance movement gathered strength, opulent coffee palaces sprang up across the city the 1880s to woo Melburnians away from booze.

‘People were being encouraged to abstain from alcohol, and drink coffee instead, as a way of improving their quality of life, and also their social standing,’ Linda said.

The Federal Coffee Palace on Collins Street became so popular that it published a visitor’s guide. A pull-out map showed where to find many other coffee palaces around the city.

When the boom came to an end in the 1890s, many coffee palaces morphed into hotels such as the Victoria Hotel and the Windsor. They are still part of the Melbourne landscape today.

Wander out in search of a pick-me-up tomorrow morning, and you’ll soon enjoy your piccolo courtesy of an espresso machine popularised by Italian migrants after the world wars.

The revolution gathered steam on Lygon Street in the early 1950s when another trailblazing grocery store started serving coffee with an espresso machine.

Espresso bars soon spread through the city like a warm glow. They became an important place for migrants to meet and socialise and slowly won over tastebuds across the city.

As the pace of city life picked up through the 20th century, Melbourne’s coffee culture gathered steam too. The humble cup of chino evolved into a latte in a glass (so fancy). Latte art emboldened the local act of barista worship. 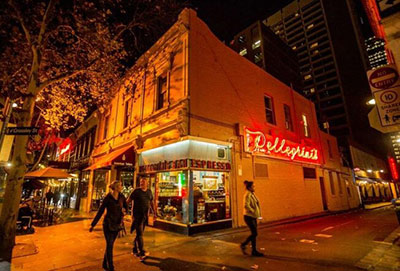 Pellegrini’s on Bourke Street served espresso in the 1950s

We didn’t stop to think about our growing addiction to disposable coffee cups until it was almost too late.

Melbourne-based startup Keep Cup drew our attention to an impending environmental disaster in 2007 by offering an alternative to single-use takeaway cups.

You now can find iconic Keep Cups rushing along city streets in 65 countries around the world.

‘It’s amazing to think that by modifying that daily habit, we can save thousands and thousands of disposable coffee cups from ending up in landfill,’ Linda Short said.

Rushing towards a socially conscious future

‘Coffee is an $8 billion industry in Australia,’ co-founder Drew Paten said. ‘We’re asking how we can use our business to support our community.’

After only a year in business, the three directors have big plans to parlay their profits into education and training for young people.

‘The coffee industry creates jobs in marketing, strategy, leadership. You don’t just come in and roast. There are roles within the industry, and it’s time to open that door wider to communities.’

Down the track, Talwali will also open doors for young people leaving the juvenile justice system.

Check out the latest coffee innovations, grab a brew from the best roasters in the country and meet the farmers at the International Coffee Expo in Melbourne from 27 to 30 September. Or read about what’s next in coffee from Melbourne’s coffee luminaries.